skip to main | skip to sidebar

Well I hope that I kept you in anticipation for the final reveal, it's been what, 3 months. But it literally took me this long to finish. The major part was scrapping the ceiling and then painting the ceiling. Oh man did my neck hurt so bad the next day! Well let's start with the before pictures: 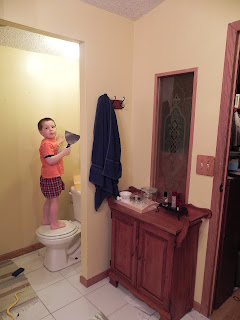 The yucky yellow walls and my little helper! 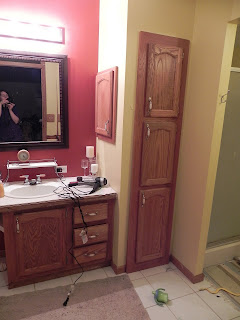 The cupboards and the gold light fixture. I didn't bother to clean the bathroom before I got started. so don't mind the mess! 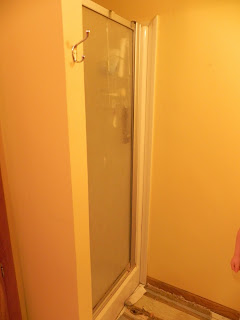 The shower area. I took the pictures at night so that is why it is so orangey looking. 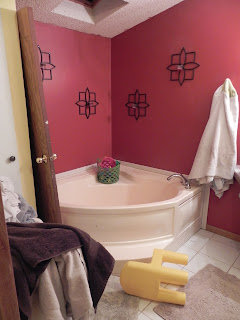 Our huge tub and the red wall!
You﻿ can tell that I need a lot of work on the bathroom. I have to admit that I am so in love with the bathroom now! It isn't completely done but here it is! 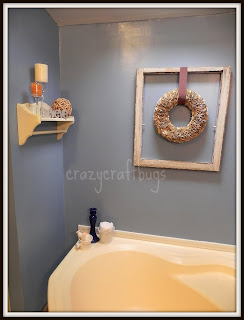 The paint is is so much better! The window frame and wreath I got from around the house. The candle stick and bins were bought at local thrift stores. 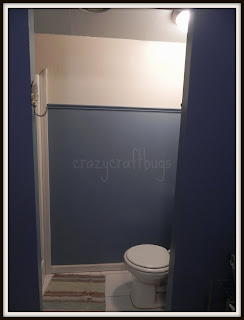 I painted the shower area and I wanted a little contrast in there so I put up some wood trim and painted a cream color above. I have some ideas about pictures to hang up there but I am still running some ideas around in my head. You can also see the lack of popcorn ceiling (Whoo Hoo!) and the new light fixtures that I, yes I, put in myself! 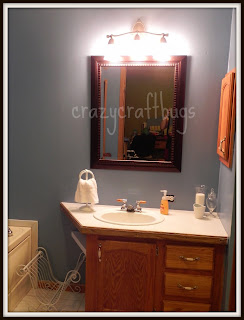 The sink area. I want to paint the cupboards but that will come. I replaced the light fixture, thank you nice people at Home Depot for your help. The previous fixture was a long base fixture and the new one just was a small circle but I will go into details later on. 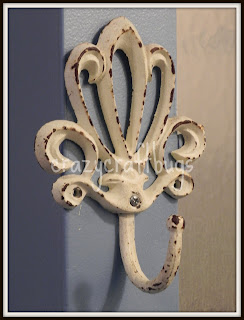 A awesome towel hook I found at a thrift store. 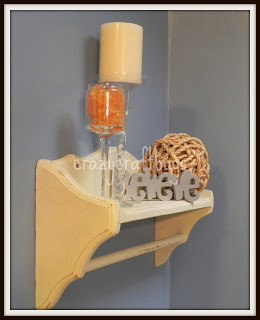 My sister had this shelf and it was banged up a little and that orange wood color. She was going to throw it away but I was like "I'll take it and sand it and paint it!" So now it is in my bathroom and I picked up most of the decorative pieces at the local thrift store.
So there you have it! The bathroom reveal! It was a lot of work but now I am loving it! So much better and brighter!
Stay tuned for more projects!﻿
Posted by Amy Meyer at 8:54 PM

Labels: Before and After

Amy Meyer
I am a crazy mother/DIY-er of two crazy boys who loves to craft, coupon and save money. Welcome! Sit down, relax and I hope you find some inspiration!